EMF and Mice Experiment with Tachyon and CRT

The purpose of these experiments was to systematically track the effects of ELFs on a biological systems and to determine what effects (if any) and Silica Disk (SD-1 - a product provided by Advanced Tachyon Technologies) has on the ELFs created by a VDT (video display terminal).

As an independent researcher I take great pride in mapping out and executing what I believe to be objective evaluations. I chose to use feeder mice for these experiments for many reasons. Feeder mice have a very short life expectancy. Since they are bred to be pet food, they are normally sold and consumed within two to six weeks of age. I want to be clear that I am an animal activist and these mice were treated exceptionally well. At no time were they ever mistreated or neglected. To my way of thinking, selecting feeder mice first of all removed them from the food chain and secondly guaranteed then a much higher quality of life, one which could not have been experienced otherwise. Their lives consisted of high-quality food, clean water, exercise equipment, and adequate ventilation.

Since mice are not social creatures, I chose to evaluate three individuals, rather than groups. I set up three systems consisting of a typical cage providing adequate room, glass-type feeder dish, water bottle, and an exercise wheel. I chose to evaluate three individuals obtained from the same breeder. All three from the same brood.

Mouse #1 was named Rudy and was set up as control experiment.
Mouse #2 was named Bert and was set up exactly the same as Rudy except I introduced a VDT (video display terminal), which was turned on and left on for the duration of the experiment. The cage is a rectangle and the VDT was positioned on one end.
Mouse #3 was named Lucky and was set up exactly the same as Bert, including the VDT. This third experiment had to be conducted in another of my facilities, because Advanced Tachyon Technologies claimed that installing Silica disks SD-1 would have an effect on the AC current when they were installed on the breaker box. I followed the exact directions provided by Advanced Tachyon Technologies regarding the installation of three SD-1 disks, covering all the breakers at the entrance box of the AC electricity.

Rudy lived five month and five days from the purchase date. He was observed to be always active and generally interested in commotion in and around his cage. He always ate well and exercised.
Bert, in the cage exposed to the unprotected VDT, lived for three months and four days. After about 45 days, Bert seemed very nervous and was always extremely difficult to catch prior to cage cleaning. He did not eat or drink as much as Lucky or Rudy. When he died he had a full bowl of food and water.
Lucky, like Rudy, remained active from day one. He was not nervous like Bert. He ate as well as Rudy and was always interested in things going on around him. Lucky died after 12 month and ten days, which was approximately twice as long as Rudy.

From the beginning I maintained an objective approach and gave each experiment my full attention. I kept good records, recording food and water usage. I was skeptical that placing three disks onto the breaker box would have any effects, but experience and experiments proved otherwise. I have clearly demonstrated that the VDT did have a probable effect in shortening the life of one subject. Yet when the subject was protected, I found the EMFs actually seemed to have a positive effect, at least in this experiment.

A side note regarding the effect of EMFs: I was interested in finding out if I could feel any difference with the SD-1 installed on the breaker box, so I set up Lucky in the same building as my office. It tool less than one week for me to begin noticing that I was not fatigued after sitting in front of my computer for several hours. I am truly amazed. I don't pretend to completely understand how or why these Tachyonized SD-1's work, but all the evidence I have collected in my research over the past year definitely proves they eliminate the negative effects of ELFs.

As a researcher in the field of human potential, I feel the Tachyonized Silica Disks are a solution for the EMF problem that plagues almost everyone in this modern era. 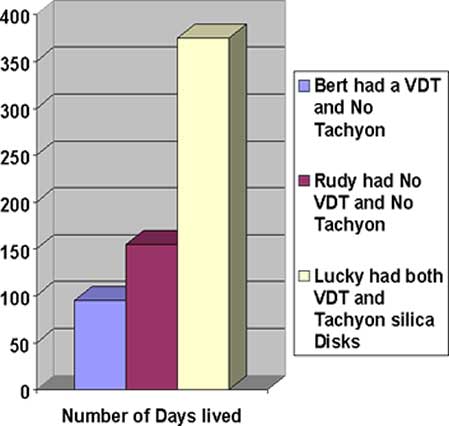 Mice and EMFs revisited
The following report was written by Sheryl Burton, a health care provider and independent researcher for over seventeen years: After a complete review of Carl Troppy's experiments I was skeptical, so I decided to duplicate his research. My objective was to provide a second independent study of EMFs and mice by duplicating as closely as possible the Troppy experiment and then evaluating the results.

The testing results of the Troppy report indicated that ELFs were responsible for a considerably shorter life span of test mice. The conclusion of this report provided measurable test data that suggested a substantial problem and potential solution.

Two new cages, substantially larger than the ones used in the Troppy experiments, were acquired. These larger cages were selected in order to increase the mice population. Ceramic feeding bowls and glass water bottles were installed as well as exercise wheels. Separate facilities were selected in order to test the effectiveness of the Tachyonized Silica Disks. Special care was taken to provide equal environments, including temperature and airflow and natural light. Then twelve juvenile mice were purchased for each site.

In both cases a common CRT was placed against the cage, turned on, and left for 24-hours per day. I continued this procedure for the entire duration of the experiment.

At the Site #2 I installed two Tachyonized Silica Disks in the breaker box of the facility with the logo facing the circuit breakers.

Within the first fifteen days, the antisocial behavior of the mice became a problem. The cute playfulness of the juveniles became more and more violent. My observation suggested that Site #1, which did not have disks, seemed to have a lot more fights and general irritation of the population. By the day thirty, Site #1 lost four mice and Site #2 had lost three. I immediately searched out an independent expert breeder who told me that the dominant mice would always harass the weaker until the strongest is the only one left. With this new insight I modified the testing procedure: I chose the two strongest mice from site, and by dividing the cage provided the two mice with their own individual living space. I let the remaining mice loose in a field. I made this decision for the health and wellbeing of all the mice in the experiment.

My observation of Site #1 were alarming. Once the subjects were isolated they became much calmer and seemed to fall into a nice routine. Both mice tore up their papers and built sleeping spots in the far corner of their area. Both appeared interested in what was going on around their cage - at first. Then I noticed they became less friendly. They seemed more irritable and quickly startled. On day seventy-nine one of the mice went to sleep and never woke. The second mouse went to sleep on day ninety-one and never woke. Food consumption was consistent for the duration of their lives and neither had had any abnormalities or obvious health problems.

Site #2 was set up identically to Site #1. The only difference was the Tachyonized Silica Disks, which I had installed in the breaker box. Both mice were very calm and curious. One of the mice built his nest close to the end of the cage. The other built it under the little ramp that went to the second level of the cage. It was obvious that neither of the subjects cared about CRT, in contrast to the mice in Site #1, where both subjects seemed to try to stay away from the CRT. The mice in Site #2 appeared to exercise more. After the mice in Site #1 died, I found myself expecting the same results at Site #2. The fifth month of the experiment passed. I began to get a little excited that these disks just might work. After the ninth month passed and both subjects were doing fine, I installed Tachyonized Silica disks in my own home. After eleven months passed, I was telling all my friends, relatives, and business associates. Finally, day 375 came and it was clear that I had duplicated the original test data provided by Troppy. I had proved by duplication that the Tachyonized Disks are effective at protecting mice from the negative effects of EMFs. So in a heartfelt ritual, I took the two fuzzy subjects to a wonderful little wooded area next to a large field and let them go.

In my professional opinion as a health care practitioner and researcher, Tachyonized Silica Disks absolutely protected the mice from the effects of EMFs. I was surprised at the effects EMFs have. I feel gratitude that a tool exists with the potential of protecting humans from the harmful effects of EMFs.
Furthermore, it also appears that the disks enhanced the biological function of the mice, increased the life span of our test subjects. I am, therefore, strongly recommending that anyone who watches TV or works on a computer quickly protect themselves. The results I encountered should be grounds for further research and studies to help illuminate the problems associated with EMFs and the solution created by Tachyonized Silica Disks.